Admiral William H. McRaven is a retired U.S. Navy Four-Star admiral and the former Chancellor of the University of Texas System. During his time in the military, he commanded special operations forces at every level, eventually taking charge of the U.S. Special Operations Command. His career included combat during Desert Storm and both the Iraq and Afghanistan wars. He commanded the troops that captured Saddam Hussein and rescued Captain Phillips. McRaven is also credited with developing the plan and leading the Osama bin Laden mission in 2011.

As the Chancellor of the UT System, he led one of the nation’s largest and most respected systems of higher education. As the chief executive officer of the UT System, McRaven oversaw 14 institutions that educated 220,000 students, and employed 20,000 faculty and more than 80,000 health care professionals, researchers, and staff.

McRaven is a recognized national authority on U.S. foreign policy and has advised Presidents George W. Bush, Barack Obama, and other U.S. leaders on defense issues. He currently serves on the Council on Foreign Relations (CFR), the National Football Foundation, and the Board of Directors of CoconoPhilips.

McRaven has been recognized for his leadership numerous times. In 2011, he was the first runner-up for TIME magazine’s “Person of the Year.” In 2012, Foreign Policy magazine named McRaven one of the nation’s “Top 10 Foreign Policy Experts.” In 2014, Politico magazine named McRaven one of the “Politico 50,” citing his leadership as instrumental in cutting though Washington bureaucracy. In 2015, he received the Intrepid Freedom Award for his distinguished service in defending the values of democracy. In 2016, McRaven was named the recipient of the Ambassador Richard M. Helms Award by the CIA Officers’ Memorial Foundation and in 2018, he received the Judge William H. Webster Distinguished Service Award for a lifetime of service to the nation.

McRaven graduated from The University of Texas at Austin in 1977 with a degree in Journalism, and received his master’s degree from the Naval Postgraduate School in Monterey in 1991.

McRaven is the author of four books including, SPEC OPS: Case Studies in Special Operations Warfare and Make Your Bed: Little Things That Can Change Your Life and Maybe the World, based on his 2014 UT Commencement Speech that received worldwide attention. Using personal narratives drawn from his extraordinary experiences he imparts to his audiences lessons in team work, personal accountability, resilience and leadership. His third book, Sea Stories: My Life in Special Operations, released in 2019, is a remarkable memoir full of inspiring and action-packed stories from McRaven's life in the special operations world. His newest book The Hero Code: Lessons Learned from Lives Well Lived, released in April 2021, is a tribute to the real, everyday heroes from battlefields to hospitals to college campuses, who are doing their part to save the world.

He met his wife, Georgeann, while they were students at UT Austin, and they have three grown children. McRaven is now a leadership consultant and stays active with his writing, speaking, and board commitments. 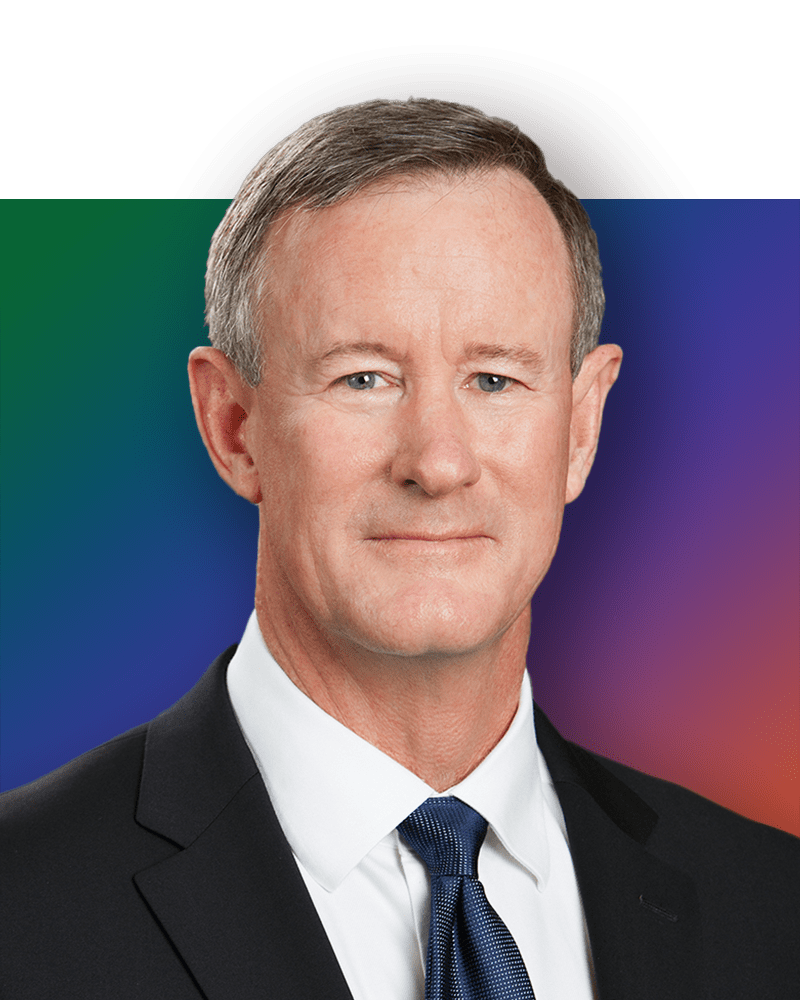 Education. Training. Industry insight. It all comes together at the ComplyConnect Conference and Expo. Take a front row seat to the latest news and trends shaping compliance, risk and governance, and hear direct from renowned industry leaders and regulatory authorities as they discuss the future of compliance and regulation.

The first annual ComplyConnect Conference and Expo answers a very real need within the compliance industry, providing the opportunity to connect and engage with peers and industry leaders in a manner that hasn’t been offered in the past. Experience unparalleled access to the resources and support you need to mitigate risk and remain in compliance today and tomorrow.

Trust us, you won’t want to miss this.

“The ComplySci portfolio of companies has witnessed firsthand the evolution of regulatory compliance, most acutely in the last few years as compliance professionals have faced an avalanche of increased risk and regulatory enforcement.

As our family of firms continues to grow, we wanted to build on the success of the long-standing NRS fall conference to create an all-encompassing industry event, one which addresses the needs of our industry in a way that hasn’t been done in the past. Because although incredibly critical to the long-term success of firms, there are not a lot of opportunities for chief compliance officers and their teams to connect and engage in discussions. The first-ever ComplyConnect Conference and Expo will provide them with a chance to do just that.”

Why should you attend?

This event is designed to facilitate discussion among compliance and risk stakeholders from top financial organizations. The ComplyConnect Conference and Expo will include:

Discussions led by industry regulators and compliance experts regarding the challenges and risks being faced in today's regulatory landscape.

Roundtable topics and workshops that let you dig into the nitty-gritty with a select group of your peers.

Active compliance analysis exploration with experts to ensure you are prepared for tomorrow's challenges.

Exhibitors from top compliance resources, providing you with insight into how their solution can help your program continue to mitigate risk.

Networking opportunities with industry peers from around the country.

Nominate your peers for the first annual ComplyConnect awards!

Know an innovator or leader who has helped change the industry this year?
Think a fellow compliance organization deserves some recognition? Nominations are open now!

Secluded in the rolling hill country of Austin, Texas, the 4,000 acre newly-renovated Omni Barton Creek Resort & Spa is the ultimate retreat. Whether you want to relax under the care of our trained masseuses, play a round of some of the best golf in the country, or experience everything the "Live Music Capital of the World" has to offer, we'll provide you the perfect accommodations for romantic weekend getaways, golf retreats and memorable family vacations alike.

The prevailing resort charge will apply to all group rooms.

Overnight Valet:
$37 plus tax per night.

The best and most interesting events the area has to offer:

Championship Golf Courses
Play like the pros on four championship courses designed around the tranquility of our scenic setting.

Interested in sponsoring the ComplyConnect Conference and Expo? Reach out to learn more about sponsorship levels and exhibit opportunities.

Don't miss out! Register now for this one-of-a-kind conference experience.